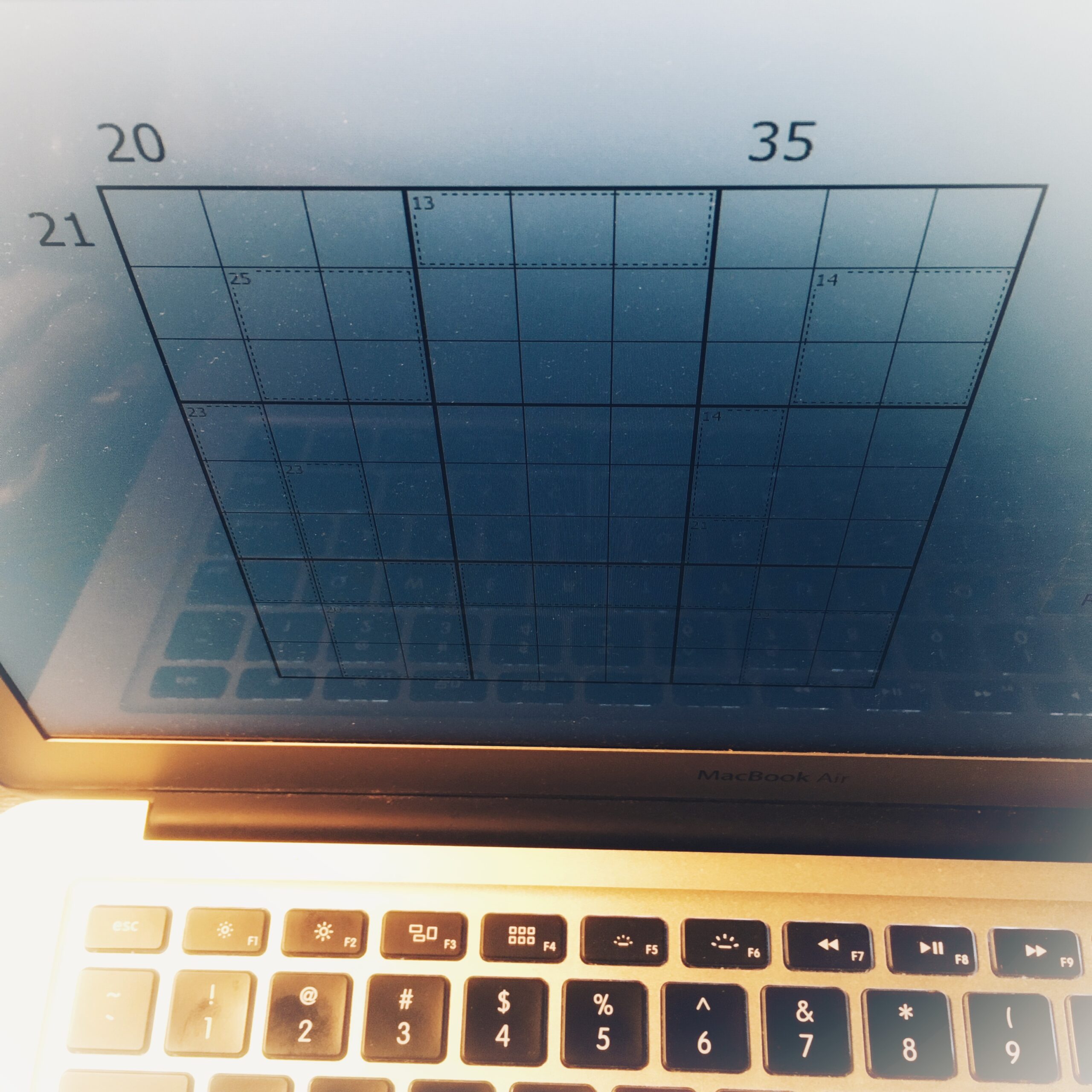 I think I may have crossed over into a new land of nerdiness. I’m addicted to sudoku videos. And what, you may ask, is a sudoku video? Well, in case you don’t know, sudoku is a type of puzzle in which the solver has to fill a grid with the digits 1-9, while following some rules. A sudoku video captures this excitement on film for all to see.

If you don’t like puzzles, and even if you do, the attraction of such a video might not make much sense. Until you tune in to a YouTube channel called Cracking the Cryptic. During each video, one of two champion puzzle solvers works through a sudoku in real time. They are so clear about their process, and so enthusiastic about the puzzles, that I sometimes find myself laughing in delight. The best part is that they include a link to the puzzle they’re solving below the video. So you can work on the puzzle on your own. If you get stuck, you have help and often empathy. And even if you don’t get stuck, you have a companion who appreciates beautiful logic as much as you do.

But this blog is about novel writing and the creative process, so what does sudoku have to do with writing?

I’m not sure, but I think they are both linked to delight and repetition. When something brings you joy, you return to it gladly and frequently. You refine your perception and build skill. Both of these serve to make the activity more fun. By enjoying it, you improve, and by improving, you enjoy it more. You end up creating a self-reinforcing cycle.

I seem to have this cycle down with sudoku. But sudoku is a hobby, so for me there’s little pressure to achieve anything specific.

Writing is different. I have goals. I set deadlines.

In the process of writing a novel, I’ve discovered that I enjoy the writing itself. But there are certain aspects of a novel, things like the slow development of a character over the course of hundreds of pages, or the ebb and flow of pacing, that are mystifying to a long-time poet.

I’m comfortable in the land of details. When a word doesn’t fit or a character speaks in someone else’s voice or the rhythm is off it irritates me on some level. I return to the snag, look more closely, pull away, until I identify the source of my irritation. Then I open my writer’s toolbox and go at it.

The big picture is different though. This is the land of story, and my story toolbox is woefully inadequate. Well, perhaps inadequate isn’t the right term. I’ve actually collected a lot of story tools—examining character motivation, grounding events in story, framing scenes, and more—but I am like a two-year-old picking up his mother’s hammer and swinging it wildly. I’m more likely to break glass or smash my thumb than nail down my story. I have the tools. I’m just not good at using them.

I know, I know. I just need more practice. If I practice storytelling instead of number puzzles, I will get better at storytelling. Right now I’m working on establishing how my protagonist will change over the course of the novel, but the character arc keeps slipping through my fingers.

It’s tempting to go solve a sudoku instead.

There’s a point in solving most sudokus where the puzzle’s logic is locked in and the numbers start tumbling into place. The pace picks up, and your hand can barely fill in the numbers fast enough.

I’m hoping this will happen with my protagonist’s character arc. I keep reviewing Jennie’s1 edits and my notes from our meeting. Each time I go back, more ideas spark. Or I’ll see a question I haven’t asked myself, so I dig into that. Many of my writing sessions yield a small insight or new possibility. Incrementally, my story is moving, wiggling and shifting, trying to find its form.

Just as I learned to swing a hammer instead of pounding it stiffly, I’m hoping I will learn to hone in on what my character is really after and how each thing she does, each decision she makes brings her closer to her moment of truth. I believe I can, eventually, somehow, figure this out.

But I need to do one more sudoku first.

Do you have feelings about sudoku? Are you practicing to get better at something?

1Jennie Nash is a book coach and the founder of Author Accelerator, which matches writers with book coaches, and also trains and certifies book coaches.

My work with Jennie Nash is supported in part by the Maryland State Arts Council (msac.org).