Learning to Use Crutches 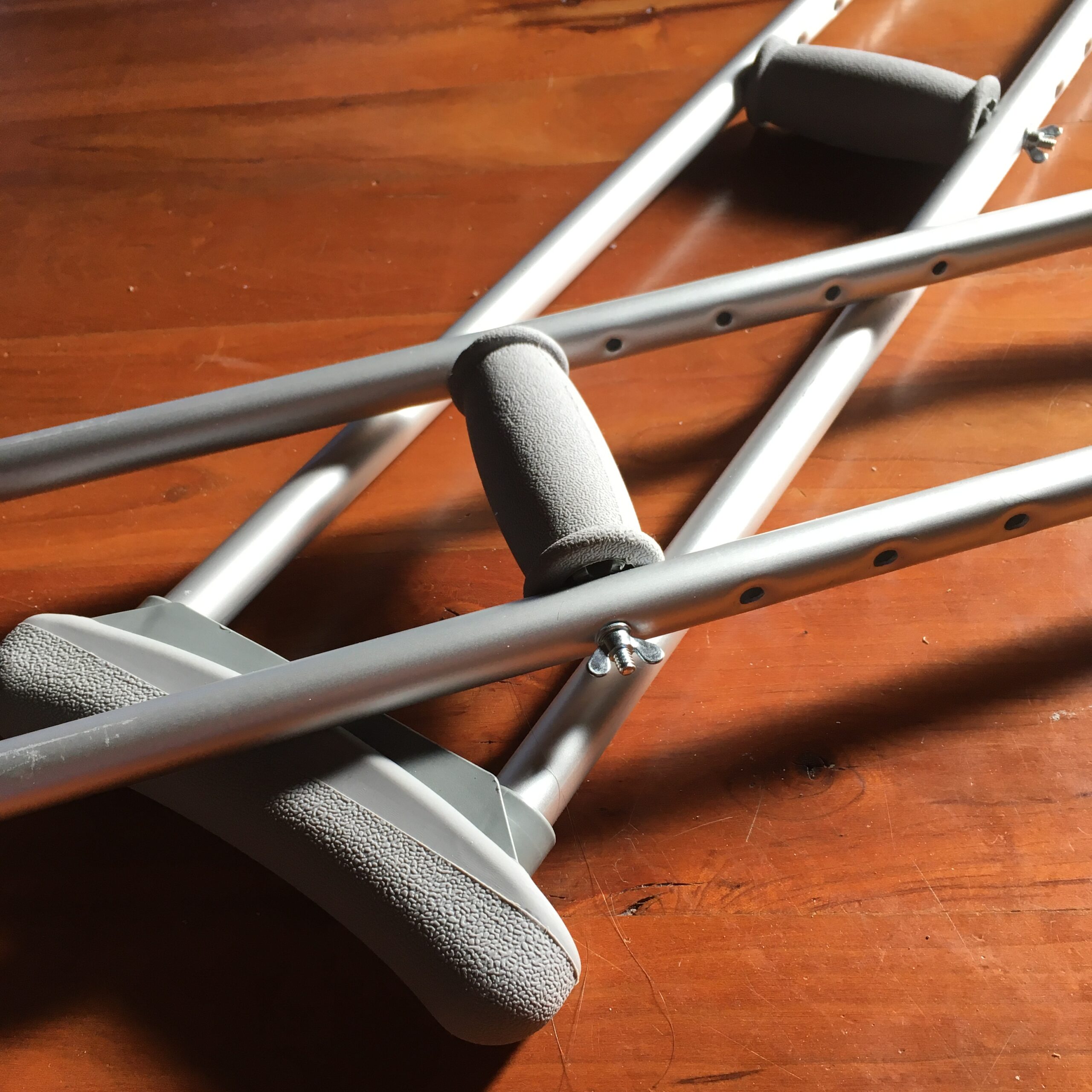 So here’s what happens when you break your foot on a midnight at the end of 2020. You ice your foot and sleep on the couch with your leg propped up. You crawl and wiggle and hop out to the car the next morning with most of your weight held up by your husband and son. (This is after forgetting to put a shoe on your sound foot, even though it’s freezing outside. There’s no way the broken foot will fit in a shoe.) You see a doctor who is excited that you are not a COVID patient, and tells you she doesn’t need an x-ray to tell her that you broke your foot, though she takes one anyway. Before you leave, you are given five minutes of instructions on how to use crutches. You are so awkward on those crutches, that the nurse wheels you all the way out to your car. You’re pretty sure she’s worried about a lawsuit when you inevitably fall, because your crutch technique is so horrendous.

That’s what happened to me at least. Hopefully it won’t happen to you. Word of advice: if you’re going downstairs around midnight, turn on the lights first.

It’s been a month since I got my crutches, and I’m glad to say that I can get around on them now without inciting a look of alarm in my husband’s eyes. It’s embarrassing that with all my years of dance training, I’m not better at adapting to physical challenges. But the truth is, that I worked for every graceful dance movement with years of discipline and effort.

So the crutches have taken some time. I find myself physically de-centering myself when I use the crutches. They are bearing my weight, and without meaning to, I assume (somewhere in my unfathomable brain) that the crutches are part of my body. But though my limbs can take different shapes, and my core muscles can regulate the force they exert, crutches do neither of those things. No matter how much my subconscious mind sends the message to rebalance or pull back, the crutches hold on to their shape and keep moving on their current trajectory. Awkward. I usually manage to catch myself with out jarring my foot. Most of the time.

What I find fascinating though, and the reason I’m telling you all this, is the psychological and emotional effect of being physically off balance. Being physically out of control makes me feel like I have no control over my life. I cede decision-making to the broken foot, and use it as an excuse for becoming lazy, which is amazingly disheartening.

I have to consciously tell myself to use my core muscles, to engage my shoulder blades so my shoulders support me, instead of sinking me into the crutches. I have to keep reminding myself that the crutches are tools that I’m using, so they don’t become physical extensions that throw me off balance.

There’s a term that I learned when I was majoring in dance—centered. According to my computer’s dictionary, the definition closest to my meaning is the fourth and last one, and therefore the least common:

“(of a person) well balanced and confident or serene.”

For a dancer the idea of being centered interweaves this concept of being emotionally and psychologically well balanced, confident and serene with being physically well balanced, confident and serene. You can’t have one without the other. When you’re spinning, or tilted at a 90 degree angle while standing on one leg, it’s critical to not only understand where your center of gravity is, but also know and feel your balance point. And it’s in fully committing to that balance point that you begin to dance, and joy suffuses your movement.

Being centered is a sometimes elusive, highly desired state of being. It is an everyday effort, grounded in discipline and demanding flexibility of mind and body. It’s about knowing who you are and knowing that who you are changes from day to day and moment to moment.

Life is more pleasurable, enjoyable, joyous when you’re centered. Problems are still problems, but they don’t completely derail you.

I don’t dance as much as I used to, but I’ve held on to some of the discipline I acquired as a dancer. Over years of being a creator, I’ve built and rebuilt my routine to embody my creative values and support my creative projects. My routine keeps me centered. I pay attention to my routine, tweaking it as needed to keep what’s important centered, even as the world around me changes.

Breaking my foot destroyed my routine. When I found myself feeling disheartened and trapped in my own house, I focused on paying attention. That’s when I noticed how de-centering the crutches were. I decided to establish a new routine. I returned to some of my normal exercises, the ones I could safely do with a medical boot on my foot. I made an effort to move around more. I opened a door and breathed in the outside world (for a few minutes at least—it’s cold outside).

It’s amazing how much these physical changes have made me feel more like myself again. I was de-centered and disheartened by crutches, and now I’m re-centered and heartened by a new routine. I expect that when my foot is well enough to bear weight, I will have to adjust again, re-center myself, create a new routine. Always in pursuit of that ever shifting center—that self that is well balanced, confident and serene.

Do you have something that centers you?

Interesting! I don’t know that I do have something that centers me, not one thing or point of reference across a whole day or days, at least I haven’t thought in those terms, but bet it might help.

I’m still trying to figure out what centers me too. I know routine is part of it, but I don’t think it’s the whole answer.

Let me know if you have any insights!