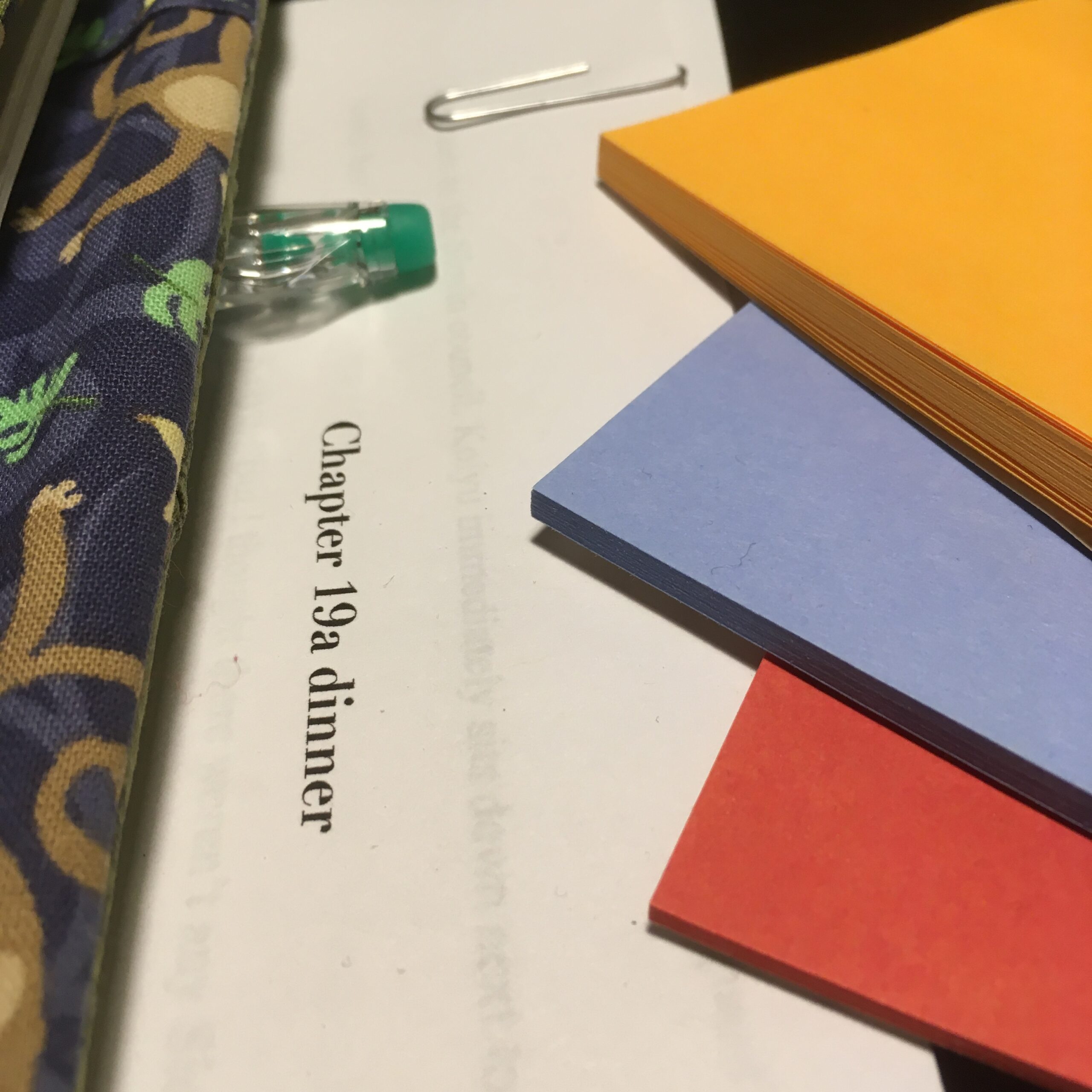 During my current editing pass, I’m trying to connect more deeply with Jacquard’s heart. Also to express her emotions, because they are sometimes missing. To do this, I need continuity from one chapter to the next. If Jacquard ends a chapter feeling sad, that emotion needs to inform how the next chapter begins. She might be in a different mood for the following chapter, but if so, I need to be clear why that is.

In order to keep the thread of Jacquard’s emotions continuous the entire length of the manuscript, I’m trying something new. I’m working on four chapters at a time. Hopefully this will create better continuity.

So, I divided the novel into ten groupings. Each group contains four chapters, but the groups also overlap. The first group I edited included chapters 1-4. The next group, chapters 4-7, then 7-10 and so on. This has made the process slower. After all, there are eight chapters I’m editing twice. On the other hand, I can focus on sections that are small enough to keep in my head all at once. One of the problems I’ve had with editing, is that by the time I get to Chapter 10, I’ve forgotten what I wrote in Chapter 3.

So how has my mind adapted to this process? Right now, I feel like I have a stronger sense of the story’s continuity and the evolution of Jacquard’s character. I’m a little past the halfway point, and I’m keeping more of the novel in my head than I’ve been able to do before. We’ll see if this lasts to the end.

I will not lie, this process has slowed me down. Editing some of the chapters twice adds a lot of words and time. I get frustrated with the pace, especially when I hit a tough chapter. My current chapter, chapter 19, is a tough one, and it’s going to be edited twice because it overlaps two groupings. I’m hoping desperately that the second edit won’t be as painful as the one I’m in the middle of.

As painful as the slow pace feels at times, I think it may be necessary right now. Sometimes I’m in such a rush to get through edits, I skip over parts that need deeper digging. This slower pace is encouraging me to dig where I need to. I think the story’s thread is becoming more consistent and more truthful because of that.

Do you ever find that you need to slow your pace in order to do something right?

This process will make the narrative so tight! Everything in my world takes more time than I think it will so, while I can’t imagine anything so daunting as organizing a whole novel, I relate about fighting the urge to rush. I love that you’re taking the time and can’t wait to see the results!

That’s what I’m hoping! I know what you mean about everything taking more time than you think it will—that is so true around here too :o)