Can a Rebel Win NaNoWriMo? 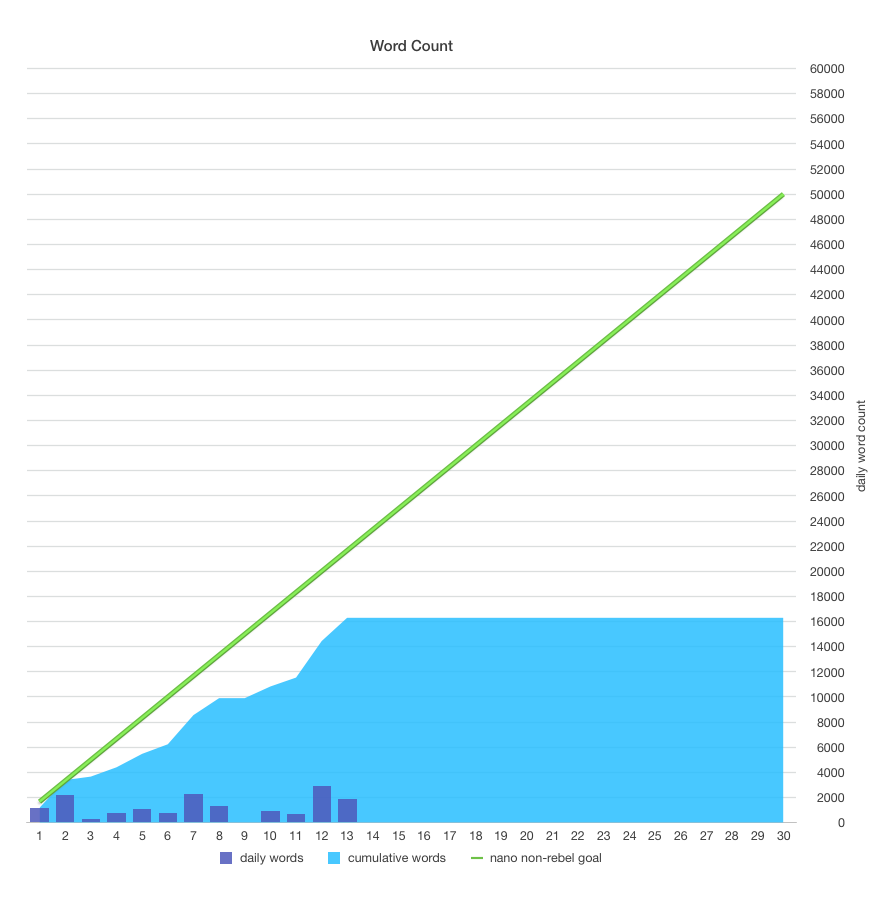 No. Of course not. You’re cheating—you’re not allowed to win.

(That’s the rule-follower in me answering. She has a strong presence around here.)

But I’ve been talking her down from that ledge she likes to stand on. After all, the rules for NaNoWriMo1 (write “50,000 words of your novel between November 1 and November 30”) seem awfully specific. I get it. NaNoWriMo is a creative project, a community effort, a way of encouraging people to do the work and have fun with it. They set up clear parameters for everyone to measure themselves against.

That seems fair enough. But “Who says life is fair? Where is that written?” (a little nod to Peter Falk as Grandfather, reading The Princess Bride)

I’d like to convince my rule-follower self, and anyone else who’ll listen, that winning NaNoWriMo has only a little to do with writing 50,000 words and a lot to do with tuning in to your creative spirit.

Because that’s what really matters. And let me tell you, your creative spirit has a mind of its own. I’ve probably never met your creative spirit, but I’m pretty confident I’ve got that part pegged. Creativity is heady and fun and maddening and mysterious and unpredictable. Sometimes it demands that you sit down for hours each day, sometimes it likes to go for walks. Sometimes it wishes you would leave it alone for awhile so it can figure out the hard stuff.

I’ve been experimenting with novel writing for years. I’ve explored other writing and creative pursuits even longer. And I have one basic rule: Figure out what works for me today for this project—do that. Then tomorrow figure it out again—and do that. Keep repeating.

So why even participate in NaNoWriMo if you’re not going to follow the rules?

Because this November, it’s helping me shift into revision. It’s focused me on a one-month block of time so I could define my next steps more clearly. Plus it’s fun to get caught up in the online excitement, to feel like I’m part of a community.

But I refuse (this is for you, rule-follower) to compromise my creative process for the sake of arbitrary rules that don’t fit my current needs. Instead, I pledge to follow rules that challenge me, as long as they’re working.

To keep rule-follower happy, I figured I would not update my word counts online or upload my words to certify a win. I wasn’t expecting to win anyway—I’m not spending enough time drafting to get to 50,000 words. But then I noticed I had written a good number of words as I worked out problems and wrote scene cards—almost 1200 on the first day. That’s not the 1667 you’re supposed to produce per day, but it’s not nothing either.

So I’ve been updating my word count online.

And I’ve been eyeing my schedule, trying to figure out if I could possibly get to 50,000 words by November 30. It’s pushing me to try a little harder. Which is the whole point of NaNo.

I’ve convinced myself that if I do get to 50,000 words, I totally deserve to certify my win and get the title of winner. Maybe I could even check out this year’s winner goodies.

(Now I just have to convince rule-follower that I’m allowed.)2

But the real point is that even if I don’t “win” (and I’m currently falling short), I am planning to WIN. I’m behind on words, but my story’s gaining depth and the ending is becoming clearer, which is worth way more than any number of words. At the same time, there’s a mysterious irony to all of this. Because even though the story and the creative process are what really matter, they only exist if I’m putting down the words. Lots and lots of words. 50,000 of them should just about do it for November. Or maybe something close to that.

1More about my NaNoWriMo goals this year here.

2From Wikipedia : “ ‘Rebelling’ is allowed, as NaNoWriMo is considered a ‘self-challenge’; rebels are allowed to validate and thus receive any prizes from sponsors.”3

3(Am I allowed to have a footnote to a footnote? Probably not, but hey, I’m a rebel.) For the sake of transparency I have to make it clear that this quote from Wikipedia has a footnote of its own with a link to a source page on the NaNoWriMo site. The link is broken though, so is it valid? I’ll let you be the judge. Just don’t tell rule-follower.