Blackbirds, Turkeys, and Other Unexpected Delights 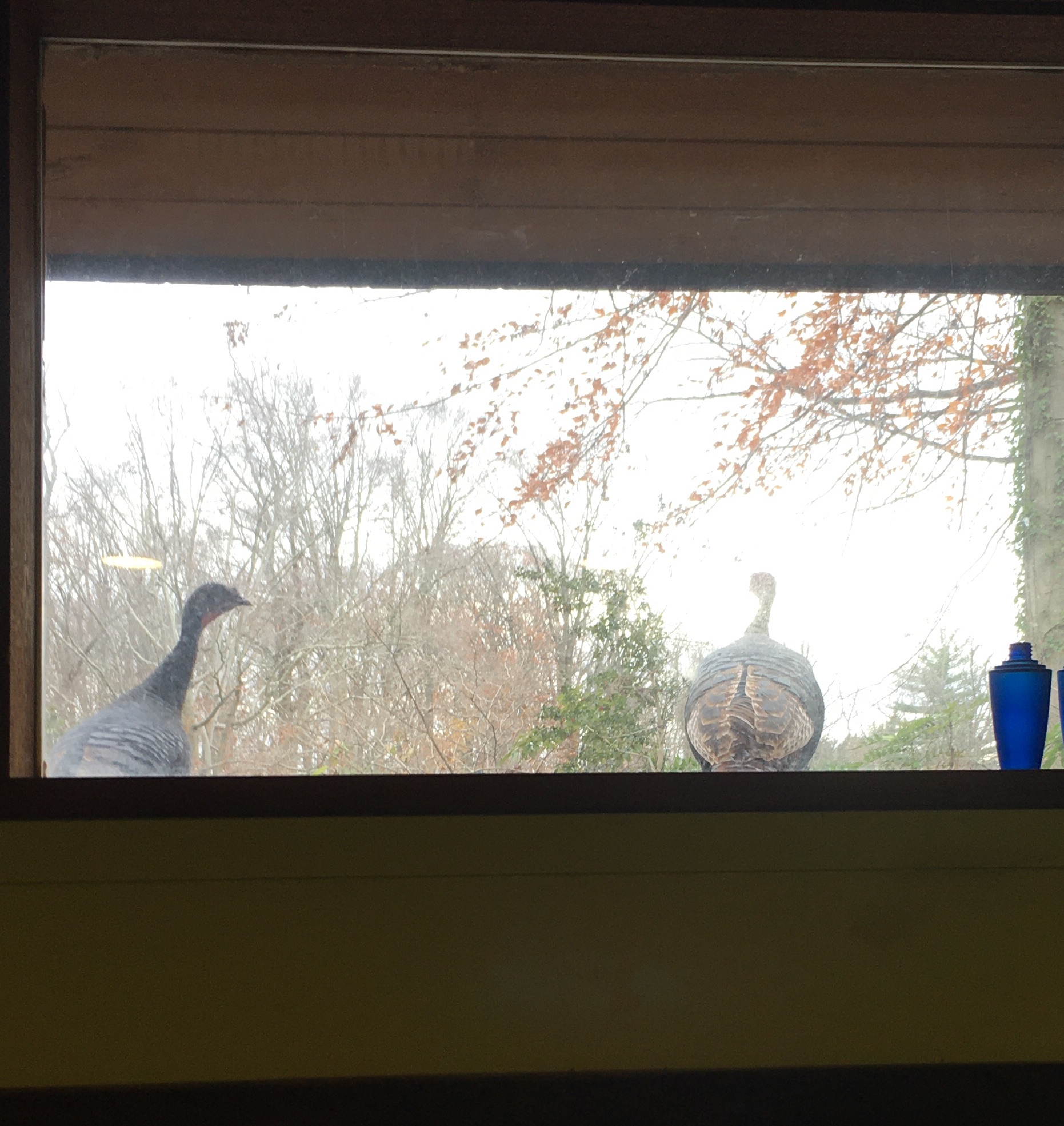 This fall, blackbirds have been flocking in our woods. It’s hard for me to express the delight I experience when see them gather in nearby trees, their black wings a dark contrast to yellow foliage. They call to each other and wing from one branch to another. Then all at once the entire flock swoops into the air. Birds from many trees rise with one motion, then turn, light slipping over them one way then the other. It takes my breath away. I’m so riveted, I can’t pull myself away to get a camera.

I’m lucky to live with an abundance of trees. This means we have lots of squirrels and birds and deer. In the warmer months we see bunnies. And there are one or two neighborhood foxes.

But this December I saw a new sight. I sat at my studio desk typing away, working on a blog post, when movement in the window caught my eye. I looked up expecting one of our squirrels to rush by. Instead, I saw two large birds. I jumped up from my seat. One bird was half the size of the other, but they were both big, bigger than chickens. And then I saw a wattle on the larger one. Wild turkeys! Sure enough, when I googled wild turkeys, the pictures matched my visitors—one male and one female.

This week I had two pieces of back-to-back news, one of which affected me in a way I didn’t expect. Both were answers to applications I had submitted, so they were not wholly unanticipated, but I didn’t think I’d hear back on either one till 2022.

There was something about December 14th. Both answers came within two hours of each other on the same day. The first momentous email of December 14th was from Author Accelerator, congratulating me on earning Book Coach Certification. Yay!!! I’m so excited about this, as well as nervous to forge into a new profession. You’ll be hearing more as I find my way :o)

The second momentous email came less than two hours later—a “thank you for applying” which of course means but we didn’t pick you. This was for a fellowship that I applied to six months ago—a massive, life-changing opportunity. I poured my heart and an intense effort into that application. It was a long shot—like buying a lottery ticket—so I mostly expected a rejection. But having gone through rejection cycles so many times, I also expected to be thoroughly saddened by not getting the fellowship.

That’s not what happened. I was actually fairly even-keeled in my reaction. I knew from the subject line it was a rejection, so I think that helped. There were no heart palpitations as I clicked into the email. I was also celebrating my book coaching certification. I’m sure that softened the blow.

But what really surprised me was the twinge of relief I experienced when I read that rejection. Relief! In the six months since I applied (which included submitting a draft of my novel), I have continued editing and improving my story. I have also allowed myself to imagine what it would be like to win the fellowship. Not as an abstract everything-would-be-wonderful event, but as a real what-would-it-actually-mean-for-my-novel situation. Don’t get me wrong. The fantasy was pretty awesome. I would have been ecstatic to win. But in giving myself room to dream in real terms, I came to realize that winning would have put all kinds of pressure on me. Things would have gotten intense and real pretty fast, I think.

My twinge of relief was not delightful the way winning would have been. But there is a small joy in feeling resilient, in having confidence that my book will find its own way, in its own time. An unexpected tiny delight.

Have you been surprised by any unexpected delights this December?